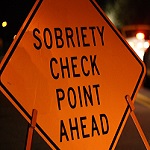 In 1982, the National Highway Traffic and Safety Administration (NHTSA) established three official tests for police officers to use when investigating a DUI suspect and to determine if a particular driver is intoxicated. These field sobriety tests examine a driver’s coordination, balance, and dexterity, all of which are affected when a person’s blood alcohol content (“BAC”) increases. Many of the tests also help the police officer determine if the driver is able to perform simple tasks simultaneously since alcohol impairment diminishes the ability to divide attention among multiple tasks. There are many different types of field tests such as reciting the alphabet, counting, finger dexterity, finger to nose – among other exercises – that a police officer may request a person to take; however, there are only three standard tests established by NHTSA that are administered under conditions with adequate lighting and on level, dry ground. NOTE: There are also countless other ailments or other conditions such as having a medical condition or being obese or elderly that can cause one to perform poorly on these exercises that have nothing to do with alcohol consumption. 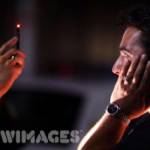 The Horizontal Gaze Nystagmus test is a field sobriety test that is NHTSA approved. When a police officer asks the motorist to perform this field sobriety test, the police officer will be looking for any involuntary jerking of the eyes, which is often caused by alcohol consumption. However, nystagmus can occur naturally, due to other reasons and/or without the presence of alcohol consumption. The police officer will instruct the motorist to follow a stimulus such as a pen or flashlight with the eyes.

In each eye, the police officer is looking for three clues: 1) a lack of smooth pursuant when following the stimulus; 2) any jerking occurring when the eye is looking at the stimulus at maximum deviation; and, 3) any jerking that starts before 45 degrees. According to the NHTSA study, if the police officer properly conducts the test and four factors occurring between the two eyes are present, then it is possible that the BAC of the motorist is at least .10% and is over Virginia’s legal limit of .08%.

Failing the HGN field sobriety test does not automatically result in proof beyond a reasonable doubt that the motorist is driving under the influence of alcohol. In fact, many people suffer from a natural nystagmus in their eyes. There are other factors that may trigger nystagmus, such as: the police officer moving the stimulus too quickly, making the stimulus come to close to the motorist’s eyes or by not allowing the motorist enough time to follow it during the test. Furthermore, despite its approval by NHTSA, many courts have ruled that the test is not scientifically reliable. 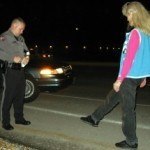 Alcohol is a depressant that slows down the body’s central nervous system. This can cause an inability to maintain balance. If a motorist is suspected of DUI in Virginia, then the police officer may have the motorist perform a field sobriety test known as the One Leg Stand. This field sobriety test is approved by NHTSA. According to the NHTSA study, this test should not be offered by the investigating police officer if the motorist is over 65 years old or more than 50 pounds overweight or suffers from a physical disability.

The One Leg Stand is a divided attention test designed to see if the motorist can follow instructions as well as perform the tasks required. The police officer will instruct the motorist to raise one leg, with the foot approximately six inches off the ground, keeping arms to the side at all times, watch the raised foot, and count to 30. The police officer will score you on 1) swaying while balancing, 2) using your arms for balance, 3) hopping, 4) putting your foot down and 5) inability to complete the test by putting your foot down more than two times. If two of any of these clues occur, then it is said that the motorist failed the One Leg Stand according to NHTSA. 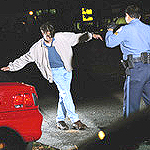 The 9 Step Walk and Turn test is a divided attention test designed to see if the motorist can follow instructions as well as perform the tasks required. The police officer will instruct nine steps to be walked, heel to toe, on either a line or an imaginary line, turn on a pivot, then walk back nine steps heel to toe on the same line. This test must be performed while keeping arms by one’s side at all times and while counting each step out loud.

Let us review YOUR case today. We can help!